Welcome to the StripedRhino Blog, a dumping ground for all things web related and or otherwise just cool!

Striped Rhino Website Development has just launched a new website for Polson Theatres, Inc., the Montana and Idaho based movie theater chain.  The company currently has eleven theater locations and will be expanding into more locations in the coming years.

After an initial conference with the client, it was clear that the client had two major goals for the new website:

The new website is built on the WordPress CMS (content management system), and uses a highly customized theme that was built from scratch and allows for SUPER easy biweekly updates of movies and showtimes for all eleven movie theaters. 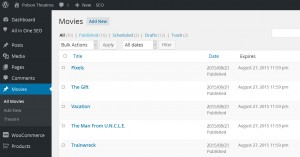 In order to accommodate the clients needs, a Custom Post Type of “Movies” was set up.  This post type has custom fields for desired movie information such as title, run-time, rating, description, etc., as well as fields for showtimes at each theater location.  In order to add a new movie, all that the client has to do is fill in the fields with appropriate information. If the movie is scheduled for a particular theater, the custom field for the individual theaters get filled in with showtimes (for example Polson: 4:00 | 7:00 | 9:00 | Daily); that’s all there is to it – the database driven website does the rest of the work.  By filling out one field on the custom post, the movie is automatically displayed on the homepage, the individual theater page, as well as pages such as “At A Glance“, which shows all current and future showtimes that the client has set up.

Generally, new showtimes start on Friday morning and run through the following Thursday. Historically, this has meant that in order to keep the website accurate, listings needed to be added as close to midnight on Thursday night as possible. The new website, however, is set up to allow for publishing and expiring posts at a previously selected time. This will allow for the website to be updated whenever it is convenient for the client, without the need for late night updating. On Thursday night at 11:59 PM, new posts will populate the website, and old posts will be removed, automatically. 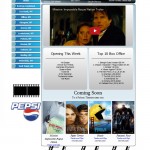 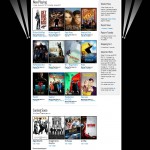 We sold the idea of this site to the client based on the fact that it will save them many working hours per week. A rough estimate was that the old website took anywhere from 5-10 hours to update each week. On the new website, the client should be able accomplish the same job in just 1 or 2 hours per week. Using low estimates, this will mean that the client will save about 200-250 hours per year – which directly converts into a savings of THOUSANDS of dollars in labor!

Furthermore, because the client no longer has to deal with complicated html/css, it is now also possible for them to hand the task of managing the website off to an employee. This will free up the management to handle other, more important tasks – tasks such as …running their business.

Maybe it is time that you upgraded your website… 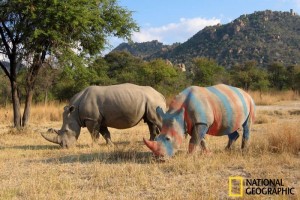 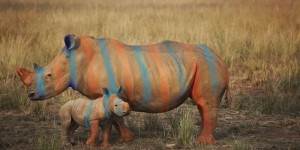 The point that I would like to emphasis about this article is that an online store is a great way to augment your brick and mortar business. It gives your customers the ability to shop your merchandise 24 hours a day – 7 days a week. And it also broadens your customer base from the confines of your neighborhood to the entire world. I know the ins and outs of running an online business and would be happy to work with you in finding the same success for business!

The following article was written by Bryce Gray and published in the Lake County Leader. 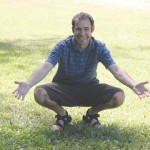 POLSON – Before last year, Polson resident Michael Brandt had never found a four-leaf clover. That all changed when an ordinary trip out into the yard took a fateful twist, and Brandt and his girlfriend, Ali Bronsdon, discovered one four-leaf specimen… and then another… and then another…

In what was either a stroke of fantastic fortune or a fluke of frontyard ecology, a half-hour search that day yielded a staggering haul of 180 four-leaf clovers. With some creativity and clever marketing (not to mention an ever-growing collection of clovers), Brandt was soon inspired to launch the website realfourleafclover.com and has been seeing green ever since.

Little more than a year later, Brandt’s start-up has helped him become a veritable kingpin of the “surprisingly lucrative” online clover business, netting over $2,000 in sales and attracting customers from all over the United States and Canada.

Brandt says that originally he had no intentions of climbing towards the top of the four-leaf clover industry. But after amassing a stash of clovers that would turn a leprechaun green with envy, Brandt says that his “entrepreneurial nature” quickly got the best of him.

“When I got 200 of them, I wanted to be competitive in the clover business. So I found who my competitors were and honed my search engine optimization,” says Brandt, who runs a website development company called Striped Rhino as his day job.

Soon, Brandt had ensured that realfourleafclover.com was one of the top Google search results for prospective customers before sitting back and watching the orders come pouring in.

Brandt has been impressed not only by the sheer volume of orders, but also by the size of some of the orders received. Single clover-hungry shoppers have placed orders of $90 and $120, and, earlier this month, someone requested 200 clovers, which slightly exceeded the site’s current inventory.

While the money from his foray into the clover business has been a pleasant surprise, Brandt says that he has benefited from the side project in other ways.

“I’m a website developer and have clients with stores and I wanted to figure out how it works. With this business I’ve been able to figure out the nuances of running an online store. It just so happens that it turned out to be fairly profitable.”

Brandt has also crafted the website into a good corporate citizen, making a donation of 10 clovers and $100 to the charitable Wings for Wishes fundraiser held last weekend.

In addition to “naturally grown” four-leaf clovers, Brandt’s yard has even borne a number of rare five-leaf clovers, which are available on the site for a premium. However, Brandt says “there’s no market for them,” as they have not sold as well as their quaternary counterparts.

The meteoric rise of the start-up has not gone unnoticed by the industry’s power players. Brandt was recently approached by a “purchasing agent” from South Korea offering to become an offshore middleman for four-leaf clovers at a reasonable rate. Brandt turned down the supplier’s proposal, but not after receiving a free sample of “really high quality” Korean clovers in the mail.

With more than $600 in sales over the past month alone, business is booming as summer draws to a close, although leaner days loom in the company’s immediate future. Brandt says that the inevitable onslaught of winter will put an end to the harvest and temporarily deplete his inventory.

But come spring, the yard will be lush with a new generation of clovers waiting to be paired with another wave of customers.